We’ve arrived in the very-far north & with it completed our pursuit for 300 species; that’s 300 bird species, seen - done & dusted. Not bad for 12 days; the next fortnight will record how many more. We’re currently on 304 sp. & will spend the next 2 nights flogging the remnant sand forests & the Pafuri region before we return to the central regions for some R&R i.e.: the big cats. The highlight off a list of many was the Egyptian Vulture – an unlikely, timely – fortuitous twitch if ever ‘lucky’ meant more than fluke. In the 300 our nominated candidate for ‘dip-to-date’ i.e.: not seen – is the ubiquitous Spotted Eagle Owl… a commoner on the keep.

Some days the blog writes itself. This is one of those days. We’d left a little later than usual - & on that point I have a theory. In the silly season the race-to-be 1st – out the gate / at a sighting often leads to gear-grinding & a leaden foot – neither activity conducive to ‘game-viewing’. The game-to-be-viewed are equally contemptuous & allow the race to pass before taking to the field themselves. Go out ½ hour later & voila – you get to play with the big boys. Yesterday a leopard at 12 paces from the gate – today, 2 hunting cheetahs; further afield [most of the early-birds flew past].

Here’s how the saga wrote itself in the sands: … on the left of the road a small family of wildebeest – one small calf. On the road & just off the road, on the right, a coalition of cheetah. We held the middle ground. Behind us – our trailer [forgotten at the time]. Two other vehicles were on-site – one before us / one after. At the time, drizzle – the pre-cursor for what turned out to be a jackets & jersey day; hot chocolate too. Yesterday the thermometer touched 42° C [only in Africa…].

For the 1st few minutes we looked at them / they looked at us – the wildebeest frolicked in the clean & fresh. Few paid the antelope much attention – the cheetah holding the table.

… and then, raised ears; a quick sum of the odds & a hasty crossing over to the other side. Both groups of fated prey & predator held similar ground; a debate & a reckoning was on the cards. Fate had sealed the dice - & the die was cast.

The 1st cat held low – the 2nd [two or three paces behind] gained traction in the cloying mud – stretched a long limb & covered the 100 paces to the wildebeest calf in less time than it took to write this sentence. Dust broiled – death bellowed - & the adults set about the two cats; snorting, biting- kicking even. Horns flashed in the mist. One cheetah grabbed the hapless waif – swung it off its feet like so many bags of beans & applied a toothy-tourniquet to the youngster’s throat. The other baited the rest of the herd – loud chirpee, chirupee cheaps – like an emergent duckling / comical really given the gravity of the situation - bloody frightening as it turned out… the wildebeest adults gave ground; milling & snorting. In the interim the dust had settled & the waif was gone. From start to food – 5 or 6 minutes. From the starter’s gun to the take-down – 4 seconds. The cats fed at length & we left them to their breakfast some time later. Whilst they ate – almost farcically – the living herd grazed / relaxed & lay down perhaps 40 meters away from the feeding cats – they might even have been closer. Fearless or an inherent & necessary survival characteristic? Shrinks are few & far between in the African bush…

Between the start of the chase & the strike on the gnu, my alter idiot, unaccustomed to more than a day or two of quiet, slammed the car into reverse – gunned the engine & let fly / all eyes on the chase. The ensuing jack-knife came as a complete surprise to me – the crunch & broken glass equally uninvited / unexpected.

The damage is, as my broker will say; – shocking, extensive / expensive & damn stupid! 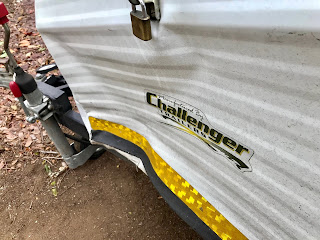 Even so – we numpties laugh in the face of pecuniary normalcy! Was the post-crunch angst worth the reward? Every cent & hard-earned penny!