I suppose it depends on how you look at things. We’re here; others aren’t & in that context then – this:

The beauty of the Kruger, in the summer, are the extended hours daylight affords those fortunate enough to be here - those who call this piece of Africa home; even if only for the shortest time. We’re spoilt for choice – ‘Do we lie in?’ ‘I think we’ll beat the gate & get there early.’ ‘Late to bed – or early-night – braai or otherwise [You get the point].

Day 7 started off as we’d planned the night before. We’d forego an early-out [how many leopards do we need to see?] & have a cooked breakfast on the patio; a 1st for us I think. We’re rabid ‘early-outers’ as some of you are I would guess. Out even earlier, I thought I’d catch up on the blog; do some work; whatever. There’s much to be said about productivity at dawn & especially to the tune of late-to-bed owls & 'jars. A perfect start. The family joined me soon after & breakfast was well & truly on the sizzle.

… and then a troop of baboons attacked the table: brazen, undeterred & ready to go to war. We complied until we didn’t; fending-off as best we could but injury, for toast, isn’t worth the bite.

Later, much later, we’d headed north stopping for a leopard perfectly at peace – our anger had stilled - & we sucked in the joy that is this place – & the nub from which we return; year after year. Alisha lent a hand on the bridge – & Sebastian took his first steps on his road to a balanced childhood – his 1st camera in hand – an early Christmas: a Greater Blue-eared Starling within arm’s length, perfectly still, the subject – happy – him & it; a bond even.

… and then a troop of baboons ripped open the storage cupboard back at camp – hopeless / inadequate locks – a warning on the wall; that's it. Nothing done. 3 weeks of food lost – trashed – discarded; the night’s rest in tatters; another sobering visit to the hopelessly inadequate embarrassment Sanparks calls a restaurant.

… and so, we left the park on Day 8, some 6-hours’ drive away to replace the food – the morning quiet in the car but these things are what they seem until you change the equation. We returned, much later, to Engelhard Dam & watched the drama of the wild unfold – before us. A herd of elephant hemmed us in – behind us; another. We sat quietly – no place for us other than in our space. We were left to our beating hearts & then a snort / a scream – a blow. Racing out across the front a large tom-leopard; unseen until then. Under the milling feet of the giants he grabbed a young impala – made off. The circle of life in all its normalcy; we the spectators / participants / the storage of the record. Within 5 minutes the herd & the impala had returned to peace. We returned to camp – forewent the storage on the veranda & stored our food inside – behind closed doors – in the fridge; as we expected we were entitled to do without embarrassment or trepidation. A perfect afternoon. 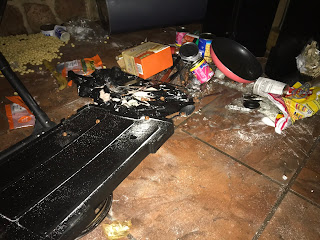 …and then the baboons came again – attacked the chalet when we were out. The largest of them ripping off the fly-screens that protected the windows none more than a hand-span ajar. Our neighbours commenced battle until they didn’t. One large male the aggressor. The fridge ripped open – the crates broken into & everything edible wrecked / damaged / eaten / stolen.

… & then we were angry; really, really angry & the ‘manager’ got aggressive; refused our questions - denied us access to his boss & the cleaning / maintenance staff were put-out; surly & as I write this, I’m close to quits.

For those of you still on this - we're on 276 species for The Trip.