Is there anything more annoying, less useful even, than a leopard & her cub next to the road? It’s bloody chaos & we’re usually in the thick of it. Glance left & Alisha hangs on the cub’s every flirtation. ‘Can I chase my tail mummy?’ Golly-gosh wasn’t that impala sirloin tippity-poo?’ blah, blah flippity blah. Get off the road! There be birds about...


… but 1st, a public announcement: - Tamboti, a satellite camp near Orpen, is a bush-camp favourite of ours even if the accommodation is dirty, run-down & creeping back to the wild. That said, in Sanparks’ defence, most of us are porcine both in appearance & in nature. We are given to cravings at the me-me-me trough. Few give the proverbial for anybody else esp. when the facilities are shared; no more beautifully illustrated than at a shared ablution block – a NIGHTMARE of locker-room smells, mud, wet toilet paper & my all-time happy face – hair in the basin. What’s with that?

Waking early to a soft drizzle, the 1st coherent thoughts registered on the assembly-block of cold-steel-logic ran something like this - ‘praise be the great twitcher in the sky’ - followed up by: ‘It must hold the bird … for sure!’ - ‘Yes indeed, it might.’ & then ‘It hasn’t before, probably not’ before I concluded with ‘It’s a fool’s errand; damn bird’. Sinking back into the cot I shared this sequenced discourse with Alisha who has the uncanny knack of hearing what she wants to hear & when she wants to hear it … We were a Go, Go, Go! The Egyptian Vulture had been seen near Singita; we were only 60km-away AND vultures remain grounded in bad weather but then… those bloody leopards.

By the time we’d pushed & shoved our way to somewhere near the co-ordinates 1st reported [4:30pm the day before], we’d sold our morning for a long-shot at an upstart. The bell had tolled 8 times. Up above the sky was dry & vultures wheeled. We were looking for a single bird – close enough to the road to see it – at one locale – in 2 million hectares. A needle in a needle-stack. The tree was empty [as I said it would be, remember?], our souls were laid bare; the anticipation - a lead balloon; mine eyes watered – dust I think. Alisha’s far-away-look premised a full-blown charge & my ears recoiled in trepidation. Leopard & lion lay in the dust of another failed attempt – 3rd day running. 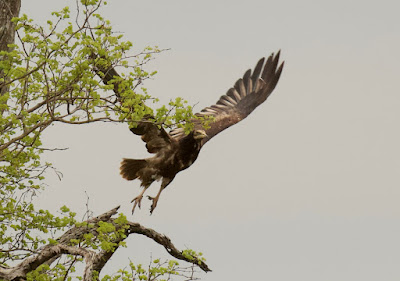 And then over one hill – then another a bird rose from off the ground & settled in a tree. It shook itself – turned around & ‘decloaked’; a pale lemon visage – choco-brown plumes. There you are my beauty [I knew it all along] – worth every finger-jab, every hurtful glare – up there with the gods – Pharaoh’s Chicken – me-me-bloody-me!

PS: the bird was also reported some way away @ the same time - MAGICAL stuff indeed!
Posted by Mark Kirk at 18:24